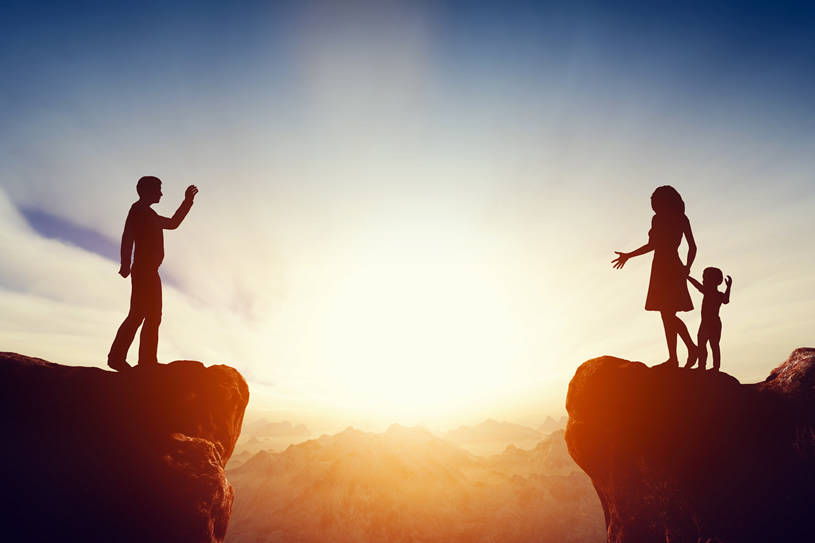 Research about the effects of divorce on children indicates that:

Children are the innocent victims of divorce.  Divorce ranks second only to the death of a loved one as life’s most stressful experiences.4  Litigation, which by definition is adversarial, can compound that stress exponentially due to the hostility it can engender and the exorbitant costs that parents can incur.  “Combat divorce,” a common term for litigation, requires that each parent have the biggest battleship armed with the biggest guns, which take aim at the battleship of the other parent.  Let’s remember that, no matter what else changes, each of these soon to be “ex-spouses” forever remains their child(ren)’s other parent.  During the process of litigation, that obvious fact can become obscured in the harsh and adversarial language used to characterize the other spouse, thus making it almost impossible for each parent to think of the other parent as their child(ren)’s other parent and as a parent who possesses positive qualities.

So where are the children in this process?  To continue the “combat divorce” metaphor, they are huddled together in a foxhole wondering what has happened to the family they once knew.  As they tenaciously cling to each other in this bunker, they are shaking, fearing whether the next mortar will land in their foxhole or whiz over their heads.  Will they lose one or both of their parents permanently?  After all, it seems like it has been a short journey from their happy family with Mom and Dad playing with them in the park to the day when Dad or Mom moved out.  They never imagined that one of their parents would not be with them in their home.  Recently, they have overheard Mom and Dad fighting and talking about having to sell the house where they grew up and where they created so many happy memories.  They hear Dad and Mom discussing that they may have to change schools.  The thoughts are whirling through their minds: We will have to make new friends!  We won’t be able to be on our same soccer team!  What if we won’t be able to keep our doggie Duke and our kitty Miss Trouble because in our new rented house no pets will be allowed!  Mom and Dad are so stressed.  We can’t bother them with all these questions.  We must be very good and very quiet, so they don’t have to worry about us too.  We need to forget about how we feel and make sure Mom and Dad are ok.

The children have experienced so much uncertainty and unpredictability recently that on an unconscious level they realize that they cannot predict their future.  Nothing seems certain.  Life used to seem certain, but not any more.  So much has changed in such a short time, it certainly seems possible to them that they could lose their mom or dad.  Who will provide them with certainty, stability, and predictability?

“A nation’s greatness is measured by how it treats its weakest members.”
~ Mahatma Gandhi

When parents are in conflict, their children are in danger.  On-going parental strife produces the single most negative impact on children for years into their future.  Previously well-adjusted children can become at risk for both psychological and physical symptoms such as anxiety, depression, isolation, sleep disturbance, nausea, headaches, and the inability to focus and concentrate.  These symptoms can subsequently cause a delay in children’s development.  Difficulties in school academically, emotionally and socially can ensue.  Adult children of divorce commonly report that they felt as though they lost their childhood during and after their parent’s divorce, because the toxicity of the “combat divorce” permeated every aspect of their lives, causing them to struggle with the symptoms described above and necessitating that they “grow up” before they were developmentally ready.

Just as wartime combat is a survival state, so combat divorce is an emotional, and sometimes even physical, survival state for children.  Parents often need help in understanding this.  They need help preventing their children from becoming the innocent casualties of their divorce.  Research tells us that 80% of the issues of divorce are emotion-driven.  While parents are in the midst of such emotional upheaval, even the most well-intentioned parents can become overwhelmed and lose sight of what is genuinely in their child(ren)’s best interest.  Before, during and after divorce, parents and their children can benefit from the guidance and assistance of peacemaking professionals, who are focused on the well being of their family now and into the future.  Most parents with minor children are going through divorce for the first time.  While negotiating this extremely difficult life transition, they have no experience from which to draw.

Collaborative Divorce and Mediation are confidential, no-court divorce options, which offer parents and children a peaceful, even transformative path for the restructuring of their family.  Research shows that mediation can be beneficial for emotional satisfaction, spousal relationships and children’s needs.5  Parents focus not on prevailing but on peacemaking, not on winning but on healing, because real winning means not wanting the other person to lose.  No-court divorce offers divorcing parents the best possibility that they can share the joys of parenthood.  Such sharing is one of the best gifts parents can give their children, because children feel and treasure their parents experiencing this joy.  When divorcing parents learn how to prevent their children from being caught in the crossfire in the middle of a combat zone and put their children in the center of healthy interactions, their children can remain children.  They are unburdened by adult concerns.  They don’t have to worry about finances, how Mom and Dad are coping, fear of being loyal to one parent and not the other, being in an alliance with one parent against the other.  being afraid to express their feelings for fear of hurting Dad or Mom or of having Mom or Dad be angry with them.  When their life as they have known it is crumbling around them, children deserve to experience the benefits of no-court divorce.

The first story: Two divorced parents were called to an emergency scene at a lake to rescue their child who had had fallen into a lake.  Rather than springing into action and coordinating the child’s rescue, they immediately began arguing about whose fault it was that the child had fallen into the lake.  The child drowned.

The second story: (For ease of style, I use the generic pronoun “he” and its derivatives.)  Two divorcing parents were attending a co-parenting training class.  Ten pairs of parents were present in the class.  The instructor gave the directions for the first exercise.  “Sit down across from your partner and face each other, with your right elbows on the table.  Grab your partner’s right hand with your own right hand and don’t let go.  Each parent will get one point every time the back of the other parent’s right hand touches the table.  The goal for each parent is to get as many points for himself or herself as possible during the exercise.  Keep your eyes closed and be completely indifferent to how many points your partner gets.  You will have one minute.  Ready, set, go!”

For one minute, the pairs struggled as each parent tried by physical strength to force the back of the other’s right hand down to the table.  With much effort and against the physical opposition of each partner, almost no one got more than a point or two.  There was a single exception.  Almost immediately, one parent remembered that his goal was to get as many points as he could for himself, and then he became utterly indifferent to how many points his partner got.  Instead of pushing on his partner’s hand, he pulled it down to the table, gave his surprised partner a quick and easy point, took a quick point for himself, and then gave his partner another point.  Without talking to or looking at each other, the two parents, with their elbows on the table, then swung their clasped hands harmoniously back and forth as rapidly as they could, thus collecting a large number of points for each of them.

Upon the conclusion of the exercise, each pair of parents reported to the group how many points each had collected.  No one had more than three points, except for the parent pair who had cooperated, each of whom had earned more than twenty points.

Despite the directions to the parents, that used the word “partner” and despite the instructions that they were to be indifferent to how many points their partner collected, virtually all parent participants had assumed that they and the one with whom they were doing the exercise were adversaries.  That adversarial assumption dominated their thinking and prevented them from getting as many points as they could have.

(Beyond Reason: Using Emotions As You Negotiate, by Roger Fisher and Daniel Shapiro, gave me the inspiration for this second story.)

A litigation attorney, tells me that when potential clients consult with her regarding retaining her for litigation, she educates them about the reasons clients should not consider litigation as an option to settle a dispute.  She explains that, if they value the relationship with the persons against whom they are considering bringing the lawsuit, litigation is likely not their best choice.

Do you think your children want you, their parents, to value your relationship with each other, just as they value and love each of you?  How will they feel most secure, knowing that their parents are partners or combatants?  What will they learn from you if you are engaged in combat divorce?  What will they learn from you if you model cooperative problem solving with integrity and mutual respect?  Who “wins” when one of your children’s parents “loses?”  What is the legacy you want to co-create for them?

“I was never ruined but twice – once when I lost a lawsuit, once when I won one.”
~Voltaire

Carol R. Hughes, Ph.D., is a licensed marriage, family and child therapist, a board-certified clinical hypnotherapist, an EMDR therapist and a former professor of Human Services at Saddleback College.  In private practice in Laguna Hills, CA, since 1983, Dr. Hughes is a respected expert and sought-after speaker on the effects of divorce on children.  In 2003 she became one of the founding members of Collaborative Divorce Solutions of Orange County, and is also a co-founder of and trainer for the Collaborative Divorce Education Institute in Orange County, CA, a non-profit organization, whose mission is to educate the public about peaceful options for divorce, as well as to provide quality training for collaborative divorce professionals.  She frequently trains and mentors collaborative practitioners and has appeared on the Time Warner Public television series “How to Get a Divorce”.  Carol has been a presenter at conferences of the International Academy of Collaborative Professionals and at California’s annual statewide conferences for collaborative professionals.  In 2011 Carol was honored with the Eureka Award, which recognizes those who have made significant contributions and demonstrated an abiding dedication to establishing and sustaining Collaborative Practice in California.  For a complete listing of her collaborative practice training and teaching workshops please visit www.CollaborativePractice.com, the website of the International Academy of Collaborative Professionals, and click on the “Locate a Collaborative Professional near you” link.  In addition, please visit her website at www.DivorcePeacemaking.com and www.CDEI.info.