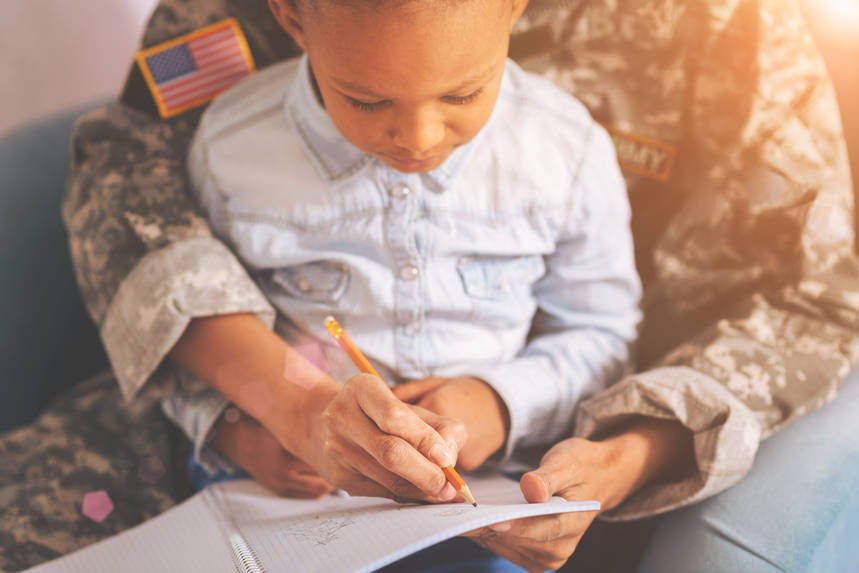 Intro: There are many considerations in divorce, but those experiencing military divorce have some additional things to think about. Here are five issues military spouses should be aware of.

Along with cooler weather and thoughts of Thanksgiving, November also brings Veterans Day, providing an opportunity to honor and thank those who have served in the United States Armed Forces. For many, that service has required personal sacrifices, from family challenges to the ultimate sacrifice. Whether during war or peacetime, events such as frequent moves, multiple deployments, isolation, stress of war, injuries, and returns to civilian life can all cause stress and anxiety for service members, spouses and their children. While the military branches offer programs to support relationships, divorce becomes a reality for many. Like their civilian counterparts, military spouses will need to determine a co-parenting plan, asset and debt division, and child/spousal support. However, those experiencing a military divorce need to be aware of some special rules.

Generally speaking, a spouse may file for divorce in the state where either spouse legally resides, with minimum residency requirements. However, the laws and treatment of property varies from state to state and there are some other factors pertaining to jurisdiction for military spouses, especially if divorcing while the service member is overseas. When there are questions about this it would be wise to consult with a knowledgeable attorney. For the most part, all other aspects of the property division, co-parenting, and child or spousal support follow state law similar to a civilian divorce. However, the “Service Members Civil Relief Act,” or SCRA, allows active-duty service members to file a Motion to Stay Proceedings which, if granted, causes a delay of 90 days, plus possible extensions.

As with civilian divorce, one of the most important decisions a couple has to make is which process to use. There are four major options: DIY/Kitchen Table, where couples sit down and reach their own settlement agreement; Mediation, where couples hire a neutral professional to assist them with the negotiations; Collaborative Divorce, where each party has their own legal representation, one or more divorce coaches/therapists, a neutral financial advisor, and perhaps a child specialist, all working together in a team approach; and Litigation, where parties cannot agree and ask the court to decide the outcome. Whenever possible, either mediation or collaborative divorce are recommended. These usually provide the most efficient process and set the parties up for more effective co-parenting and healing post-divorce.

Military pensions are considered a marital asset and the Uniformed Services Former Spouses’ Protection Act (USFSPA) allows for division, though it is not necessarily required. Technically, it is the “disposable retired pay” that is subject to division, which is the gross retired pay less deductions for disability pay benefits and Survivor Benefit Plan premiums. Spouses may divide the pension or, instead, arrange a full or partial off-set via lump sum payment in cash or other assets to the non-service member spouse. The option for a lump sum or off-set is more common in short term marriages and requires a pension valuation to determine the present value of the off-set amount.

Those divorcing after retirement use a straight-forward coverture formula to determine the marital portion: months of marriage overlapping military service ÷ total months of military service at the time of retirement. For those divorcing prior to retirement, there is still a coverture fraction, calculated as a percentage of the service months overlapping marriage based on the total service months at the time of dissolution. However, it is applied to the hypothetical retirement benefit the service member would have received based on pay at the time of dissolution rather than actual retirement.

With the implementation of the new Blended Retirement System (BRS) in 2018, many service members receive automatic contributions and possible matching to a Thrift Savings Plan (TSP), a defined contribution account. The TSP operates much like many private company 401(k) plans do, allowing service members to leave the military with those TSP retirement benefits before serving a full 20 years, even if they choose to forego the pension benefits.

3. Getting the Retirement Division Done Right

Once the non-military spouse’s retirement benefit allocation has been determined, there are two ways in which the actual division and payment administration can take place. If qualified according to the “10/10 Rule,” the benefit payments for the non-military spouse may be issued directly from the Defense Finance Accounting Service (DFAS). The 10/10 Rule refers to the provision within the USFSPA which allows for this direct payment to a non-service member spouse as long as the pension division results from a marriage lasting ten years or more, which also overlapped service by ten years or more. A Military Pension Division Order (MPDO) must be carefully completed and submitted to DFAS. Retirement divisions that do not qualify for direct DFAS administration and payment according to the 10/10 Rule must be handled directly between the parties.

There are additional considerations for survivor benefits and disability pay. The Survivor Benefit Plan (SBP) is an annuity program allowing the service member to provide continued income to a surviving beneficiary in the event of their death. Only one beneficiary may be designated, and if the intention is to name the former spouse, it must completed in a timely manner.

Unlike the military pension, which is a defined benefit plan, division of the TSP is more straight forward. Once the amount or percentage being allocated to the non-service member spouse is determined, and after the divorce is final, the account funds may be transferred into another retirement account in the non-service member’s name, such as an IRA, with a Retirement Benefits Court Order (RCBO). It is important that the terms be defined clearly and having a professional prepare this, as well as the MPDO mentioned above, is recommended.

4. Healthcare and Other Benefits

Child support is based on state law, including factors such as custody, time with each parent, and incomes. The Leave and Earnings Statement (LES) should be used to determine all forms of compensation, including Basic Allowance Housing (BAH), the value of on base housing, and other non-taxable in-kind compensation. While service members can face penalties from their commanding officer if delinquent on support payments, enforcement is typically handled by the state court system.

Like child support, spousal support, also called alimony, is determined according to state law. The USFSPA, however, limits the amount paid to a former spouse directly through DFAS to 65% of disposable retired pay, including up to 50% of pay for pension division and other garnishments such as alimony and child support. Considerations for the spousal support order may include the length of the marriage, the earning capacity of each spouse, age, and health.

While most of the issues facing military spouses in divorce are the same as their civilian counterparts, these specific concerns do need to be addressed carefully. Spouses should take advantage of the various resources available and consult with an attorney who specializes in military divorce when needed. Again, one of the most important decisions a divorcing couple must make is which process to use. Whenever possible, work together and consider mediation or a collaborative team approach, including attorney-mediators, a financial advisor, such as a CPA, CFP® or CDFA®, and therapists and/or coaches to provide accurate legal information and the best chance for effective co-parenting and healing post-divorce.

To all members of the U.S. Armed Forces, we honor you this Veterans Day and thank you for your service in defending our nation and protecting our freedom.